Prince Sils daughter Roshni is also a magician. Performing from the age of four years, she travelled all over India and abroad with her father and also with her solo performances. She performed quite a number of times for the National Television

Roshni has been blessed by Saint Teresa. The Holy Mother took Roshni all round to perform for her orphanages and Roshni performed for more than 50 times at the instance of mother. Roshni all along was glued to her fathers performances and were often praised more than her father.

Roshni is specialised in classical magic which had been popular in the past era. She studied in Loreto (Bowbazar) and completed her graduation and now preparing for C.S. Exam. She is equipped with a really colourful and spectacular show to be enjoyed by all. In the list of her prestigious spectators, there are Chief Justices, Ministers, Film personalities, Industrialists, Bureaucrats, Intellectuals, Ambassadors and Consulates. 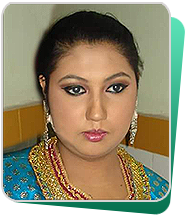 Jaya Sil is the better half of Prince Sil. She is the able wife of the great magician husband. While she manages the entire household affairs, she actively participates in the magic shows of her husband as the chief assistant and stage manager. Her physical fitness and eloquence mixed with magic skill has taken her to the height of great magical performance. She is the friend, philosopher and guide to her husband and daughter. 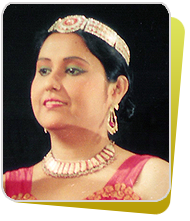 Susmit Basu is a professional magician. He married Roshni and they have a son, Brojoraj. Susmit is an IT professional and graphics designer who regularly practices magic with his wife and father-in-law Prince Sil. His specialized performance is firing the bullet to Prince Sil who catches the bullet with his teeth, at a distance. This needs specialized skill as a little mistake and a moment of delay can take the life of the magician. Susmit is gradually becoming able successor of Prince Sil along with Roshni. He is a specialised Sleight of Hand artist and performs regularly at Star Hotels with his table hopping acts. He has appeared number of times in Televisions, performing his colourful conjuring acts with silks, flowers, fires and live stocks. His attractive tall and handsome personality always attracts audience wherever he performs. As a team leader of the magical team of Prince Sil, he conjures his ability to control the whole show where ever it is performed. Click for more details 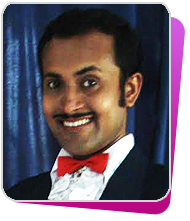 Brojoraj, who is 5 years old is the youngest member of the team. 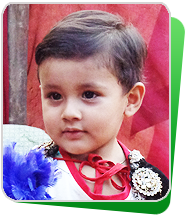